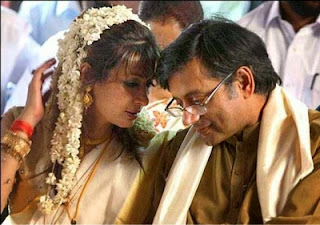 It has been shocking from the word go.

Sunanda Pushkar, wife of minister Shashi Tharoor, was found dead this evening in a Delhi hotel room. It seemed messy the moment I first switched channels yesterday and saw the “twitter catfight” about an affair all over. Today, it has resulted in a death.

All I can say right now is that the media should exercise some restraint. They did not do so a day ago, and they are not doing so now. The 'concern' too is nosey. ‘Friends’ are telling us different versions about her health. Reporters are giving contradictory accounts. It would seem that half of Delhi’s media was onto something. And I hear people are going to politicise this? Lay off.

It is asking for too much, especially since the people involved started this. But catharsis and personal anger, however ill-advised, is one thing. Voyeurism by the rest of the world is another. I read some nonsensical bytes in the newspaper where a TV anchor whose channel ran a big story was asking the two ladies to “stay totally civil in public”.

The social media has been used to settle scores, to slander, and that is worrying. It has resulted in an extreme step, but many of us have had to put up with absolute muck in public spaces that has little to do with our public positions.

Not only is it difficult to judge people’s personal lives, it is intrusive and distressing.
By Farzana Versey at 12:18:00 am