There's a Frenchman in the Pakistani Soup 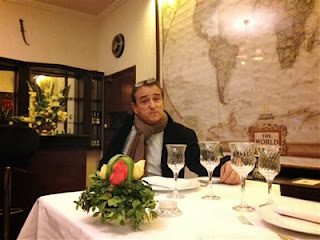 Fine dining, by definition, is exclusive. Can a foreigner bar Pakistanis from his restaurant in Pakistan, their country?

The obvious reaction would be, no. It is racist any way you look at it. However, let us see the other side.

La Maison, run by Frenchman Philippe Lafforgue, in a part of his house at an upscale area of the capital Islamabad, has been forced to shut down after there was an outcry against this discriminatory policy. There was no board outside saying so; it was a discreet decision by the management.

As the owner stated:

“It’s not a discrimination thing. It’s a culturally sensitive thing. How can I serve pork and booze to Pakistanis without getting into trouble? So I have a rule: no locals getting in...I can’t open it up to the Pakistani people because I serve alcohol. If I start serving locals, which is obviously profitable, I will have to bribe the police…which I want to avoid.”

This last bit is important and has been ignored by the commentators. There are many in Pakistan who can afford it, and do patronise fancy restaurants. However, there is much hypocrisy regarding alcohol. Many of the elite like to show off their bars and collection of wines, but do not raise their voice against government policies over their eating and drinking habits. Their laws might discriminate against minorities, but they are quite willing to tap this segment for their quota of booze. Non-Muslims and those in the diplomatic services are their sources for tipple, although they can manage to arrange it through powerful local contacts.

Therefore, the owner is not entirely wrong when he talks about having to bribe the cops.

Is there a cultural issue that he is truly concerned about? Let us just say that the Pakistanis who might enjoy their drink at home or at private parties might put on a publicly moralistic mask. This is not a blanket judgment, but it certainly does apply to a few. Sometimes, it is pragmatism. A friend who has never hidden his lifestyle has had to hear the police knock on his door quite often.

Then, there is the sensitive issue of whether an outsider can prevent citizens of the host country from entering. Most reports have gone back in time to refer to the "Dogs and Indians not allowed" policy of British establishments during colonial rule.

There are clubs in India where certain people are not permitted even today. Depending on the portfolio of the club, politicians and film stars too have been debarred by the intellectuals and corporate sections. There is also a dress code policy; the famous artist M.F.Husain was prevented from entering the British era Willingdon Sports Club because of his footwear.

I am afraid, but I do believe that private establishments do have the luxury and right to choose their entry policies. Try dressing up scruffily and getting into the Karachi Club, or even a posh eatery in Zamzama. The hierarchy is well in place.

For that matter, at an exclusive do in Karachi, my host said he would not introduce me as an Indian because it was a cadets party. Although uncomfortable about it, I did understand his position, and was in fact grateful that he let me have a glimpse of something I would never have had.

Why would the French restaurant assume that all Pakistanis are uptight? I have been to an Italian restaurant not too far from this place and we were the only 'locals' there, if we don't consider my Indian identity.

What is particularly glaring about how this discrimination thing has worked out is that the main issue has been obfuscated. The assistant superintendent of the Islamabad Police decided to do a personal recce after getting complaints (a social media campaign, naturally). These are his words:

“So I personally called in to make a reservation, and was rejected when I said I was a Pakistani. The next step was obviously to check the place out. We found over 300 bottles of non-licensed alcohol and even a casino table.”

Lafforgue was charged with "unlicensed alcohol," a crime. Where does all talk of racism disappear? As an homily, the cop added:

“How can you live on our soil and treat us like this. No rules allow such behavior. This is not the nineteenth century.”

Part of the problem is the need to look up to foreigners. It is ingrained in the DNA of the subcontinent. The protests do not emanate from the ground, but from niche ideas of access. This too is privilege.

There is a flip side as well. Local Pakistanis, mainly young women, seek out invitations to parties at the diplomatic clubs, even though they are primarily meant for embassy staff and their families. It is another matter that they are often welcomed because they add exotica and are not inhibited.

The police have shut down the restaurant for now. It would have made sense if the registered crime was not illegal bottles of alcohol but discrimination. Unfortunately, that would be a difficult proposition. For, there is a huge mirror and it shows what Pakistanis do not wish to see.

Image: Philippe Lafforgue at his restaurant, NBC
By Farzana Versey at 7:39:00 pm