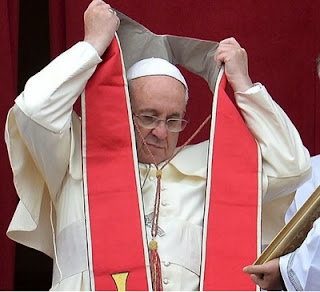 What do you think about Pope Francis being chosen Best Dressed Man of 2013 by Esquire? When the magazine says, "Pope Francis's sartorial decisions have subtly signaled a new era (and for many, renewed hope) for the Catholic Church", it is jumping the gun. As religious head, he has certainly proven to be immensely likeable. He is discussed for his symbolic gestures, and they might not alter perceptions but do send out signals about a modernistic way of looking at social mores.

However, I believe that a best dressed tag does not quite reward these gestures, much less comprehend the nuances that might get lost and possibly lose track of what is being symbolised.

Mark-Evan Blackman, assistant professor of menswear design at FIT, has been quoted as saying:

"His mode of dressing really does reflect the mindset behind it. I remember when John Paul II was buried in those opulent bright red shoes. When the current pope was elected and chose not to wear the red shoes I thought that was very reflective of his approach to being a person functioning in a role."

Every position comes with a set role, and the only dissonance possible is in terms of interpretation. That does not alter the inherent nature of the role. For true believers, the red shoes were not an impediment to their faith, just as the discarding of them will not be.

"The humility of his garments offers a way to visibly display his theological and material concerns for the poor. This Holy Roman emperor really does have new clothes."

While it is true that the Pope has been "approachable" and "humble" — though such a station is supposed to be about humility and subservience to god, is it not? — a reality check is needed here.

I am not a Catholic, or a practising believer in any organised faith system, but being surrounded by several streams of theological thought it is obvious to me that devotees, especially those unfortunate enough to be poor and homeless, do look up to pomp and splendour. It is their means of escapism. And, dare I say, hope.

Unlike the well-heeled and the educated, they do not marvel at church spires and stained glass windows, nor do they appreciate the fine filigree work of the Islamic architecture in mosques, nor the fine motifs in Hindu, Jain, and Buddhist temples. But, the sheen of the altar, the sanctum, the idols does affect them. The brighter these are, the more dewy-eyed they get. This is not about materialism, but to experience what they do not possess. It is an egalitarian moment for them, for it renews their faith due to its obviousness. They seek no evidence of the power of an aura beyond what is evident, even as some of us might rationalise.

In fact, Esquire is doing just that. Yet, quite ironically, it is performing papal sort of duties by anointing the Pope with a grand gesture that contradicts the purported purpose of rewarding him: austerity.