The flying MPs: Should they get special treatment? 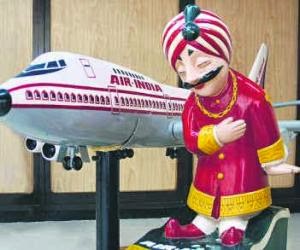 Okay. Get angry. How dare our ‘public servants’ behave like feudals. Why should the taxpayer’s money be wasted on giving them the red carpet treatment? Get more angry.

Here is what is to happen:

Being treated like a Maharaja by Air India alone is not enough for our status-conscious members of Parliament. The aviation ministry now wants all private airlines to also accord royal treatment to nearly 800 members of the Lok Sabha and Rajya Sabha...The red carpet they are expected to roll out will include a designated protocol officer meeting MPs when they reach the airport and escort them to lounge. Check-in will be done by staff when the netas are resting there and having free refreshments. After that, they will be zipped through immigration and/or security checks to an aircraft waiting for them to board so that it can take off! Similar courtesy will have to be accorded on arrival too.

Flashback to not too long ago when Shashi Tharoor had talked about how he would have to travel “cattle class” when the government was pruning expenses. The reaction was that this was insulting to poor people, and perhaps to cattle as well.

Now, how many poor people travel by airplane? So, how would they feel insulted? For that matter, the economy class – why is it blatantly called Economy as opposed to Business or Club Class – also delineates the hierarchy. There is no chance in hell that ministers and VIPs are not treated better irrespective of how they travel.

I find it horribly treacly when I read about how Narayana Murthy and Azim Premji travel coach class. Do let me know when they are squeezed between two Amazons reading newspapers spread out, elbows tugging at them with the bloke in front reclining his seat into their laps.

Besides, many high-powered businessmen do have their staff check in for them, as well as ensure that upon arrival they sail through immigration and customs. You might say these are private individuals. But they are using the system, and therefore become it. Many do become political figures once they decide to get vocal about their positions, and contribute to different parties. When I see people like Suhel Seth, Alyque Padamsee, Sunil Alagh, and lately Capt. Gopinath holding forth on issues of the common man and pampered ministers, I really wonder how much in touch with reality they are. I would also like to know where they seat the ministers at their own sit-down dinners. Knock me down with a feather if the mantriji or mantri saheba is not at the main table.

Regarding special treatment meted out to ministers, one does not need any instruction from the directorate general of civil aviation (DGCA) for it. Private enterprise is largely indebted to, and uses the weaknesses of, those in power. It will bend, if not crawl, as long as it gets its own special benefits, some out of turn. Even if it has to use ‘common’ parlance, like say “people’s car”, which again makes it seem like ‘people’ here are those blokes who manage to scrape together Rs. 1 lakh and ride that little dinky vehicle and wave out to the non-people, the supra people, in their sedans. Even if it has meant dislocating villagers and tribals with political connivance to set up factories, and rob them of natural resources.

All this happens because ministers are the feudal lords, not of the ordinary taxpayer, but of the corporates.

A few years ago, I was quite surprised to see this activist-actress-Rajya Sabha member have a woman employee of a private airline on a domestic flight carry her hand baggage from the lounge to the van to right inside the aircraft. Was there a diktat then? No.

The problem is that we are slaves to VIP culture, which amounts to us wanting the powerful to appear powerful. In a sense, this is a hark-back to the days of rajas. The junta did not wish for them to jump off caparisoned elephants and mingle with the locals. They wanted them to throw pearls and coins. Court patronage was not looked down upon and in fact helped artistes flourish. Today, it is more of a barter system.

Is it a good thing to give such special treatment to ministers?

Good-bad are binaries. I certainly do not like the idea that DGCA would send out instructions for that would make it, in effect, a word of law. But to imagine that ministers and other favoured guests will not be given preferential treatment is rather naïve.

In some ways having an airline staff accompany them is better for security than a PA carrying the minister’s little briefcase, putting it in the overhead locker, even arranging the seat for him and then wishing him a greasy-smile bon voyage, while the flight attendants hover with their hot towels. The first row 1-A or 1-D are always reserved for people like them. Why? Who has asked for this?

The problem is we make a noise over surface issues. How many of us have brought forth the problems of bad landing systems, bird hits, flight delays, airport cleanliness, lounge and plane facilities, erratic fares, and what goes on inside the cockpit before the DGCA? Don’t these affect us more than what a minister gets on a frayed red carpet?

It is like that silly move to call all elected politicians ‘sevaks’. Many of them would be only too happy to please, much in the manner of zamindars who invite you to their 'ghareeb khaana'. Humility is a luxury only the arrogant can afford.