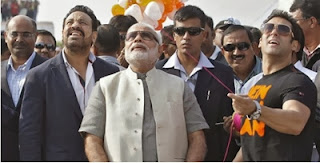 This makes news. Actor Salman Khan meets Narendra Modi and says he is a good man, a great man, flies kites, has lunch, shares a few laughs. This is news.

The BJP prime ministerial candidate could not contain his enthusiasm:

Earlier, Modi tweeted his picture with Salman saying he was having lunch with the actor on the occasion of Uttarayan.

"Having Undhiyu for lunch with Salman Khan. Undhiyu is a Gujarati delicacy and is a must-have during Uttarayan!"

The actor who was promoting his film said:

"See the good man is standing before me. I have come here after four years, have seen so much development. You tell me, I don't belong to Gujarat. It doesn't matter what I perceive...I got to meet Mr Modi I really feel nice. I believe Modi sahib should get whatever is in his fate and he will certainly achieve it."

BJP supporters who would otherwise have made a huge noise about the actor had he 'appeased' any other politician are now behaving like slobbering fans.

• It is a sign of desperation that the endorsement from a Bollywood star carries so much weight.

• In one day, how much development was Salman Khan exposed to?

• Salman Khan has been taken to task for participating in the Saifai festival on the invitation of Akhilesh Yadav in Uttar Pradesh. The BJP spokespersons have been criticising the Samajwadi Party, making Modi sound like an angel in comparison regarding the Muzaffarnagar riots. So, did the Gujarat CM take time out between the 'maanja lapet' (releasing the kite string, also colloquially used for lying) to ponder upon the film star's lack of sensitivity?

• Does anybody imagine that despite Salman's huge following he could help swing the 'Muslim vote'? In fact, why is it necessary at all? Besides, the Khan family does regular 'secular' outings, which often entails participating in several festivals, something that almost every Indian does with less ostentatiouness and without much ado.

• While promoting his film, did Salman Khan think for a moment about how his friend Aamir Khan's film (among others) was banned by the Gujarat government? Or, is looking for opportunity and freebies enough?

In that case, Jai ho-ho-ho. 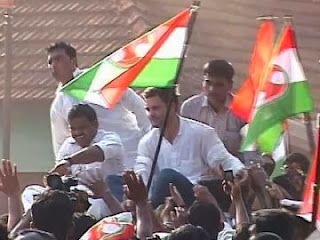 Rahul Gandhi on a visit to Kerala jumps on the roof of a jeep. This makes news.

What do the news channels do? They say he is doing an 'Aam Aadmi' thing. Every politician has mastered the art of jumping — whether it is the line, the gun, or over puddles. They carry babies, dance with tribals. Check out the pictures of all the current aspirants and you will see them in action.

We know why they do it. The more loyal than the king types could be their undoing. Take P C George who gushed:

"He belongs to the Nehru-Gandhi clan and I never thought he could just walk into the hearts of the average common man, like what he did yesterday. He has proved that his heart is there and he was able to connect with the man on the street."

Here he is affirming that the dynasty is removed from reality and whatever it does is out of magnanimity. Enough of connecting with the man on the street. A jeep rooftop view is not quite it. Just leave it as a charming gesture that makes for a good photograph. 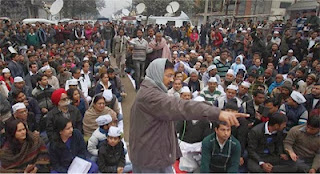 An Aadmi Party leader who is planning to "challenge" Rahul Gandhi in Amethi has now hinged his hopes on the Dalit woman Rahul had stayed with in 2008. Kumar Vishwas "was shocked to see that the family was still leading a miserable life in a kachcha house with no roof in the bitter cold. He assured her that AAP workers would at least arrange a roof for the house".

It is back to making one person into a totem.

The manner in which Arvind Kejriwal and AAP are being portrayed one would imagine that the media is ignorant and juvenile. It is sickening to watch debates where other political parties are accused of "copying" AAP. I am surprised that the new party has not been credited with discovering the very existence of the common man.

Ministers have cut taxes, prices, and held open house on designated days for years. So, why did the party's "janta darbar" become a public spectacle that had to be called off? As a report says:

The chief minister cannot push files. There are people to do these jobs. The very idea of being "human" gets a beating when barricades have to be put up, traffic is obstructed, and you have a raja-type minister listening to people's woes, dispensing justice. (Some have compared it to the Mughal courts.) There is a bureaucracy and a judiciary that has to deal with these issues, and although the criticism by the BJP that it is a parallel government is not entirely accurate, Kejriwal does make it look like a mass panchayati raj.

After the debacle, he said:

"We will have to improve the arrangements. If I had not left the place then there was a possibility of a stampede. Everybody wanted to meet me. We will streamline the system so that a similar situation does not recur."

One does not wish to sound alarmist, but in a politically fractious environment, it is also possible that rivals will try to scuttle such populist measures.

However, it does not mean there is fear. This is about sadism that comes with power — the power of being in a position of authority and of anarchy when out of it.