It takes a death...Nido and the North East It takes a death to bring us alive to what we are, but choose to ignore. The question is: How long will this wake-up call last? Are we not ready with our hands already on the snooze button?

Nido Taniam from Arunachal Pradesh died on Thursday, Jan 30, after being beaten up the previous day by a shopkeeper and a few others when he asked for directions at Lajpat Nagar in Delhi, where he was a student. One version says that he broke a window glass in the altercation.

Why did a quarrel ensue? Some say that the assaulters started abusing him, making fun of his hair colour. This gives commentators like Madhu Kishwar the licence to suggest that it is not about racism, but a fight between two sides that can be attributed to lumpenisation.

Even if we agree that Nido did not stay quiet — why do we expect that victims should not fight back? — how can we ignore that there are elements of racism here? Many young people wear their hair in different ways. Delhi is a metro where people from all over come to work.

Will a person from Chandigarh or Mumbai with similar hair invite stares and more? The discriminatory attitude towards those from the North East regions has resulted in death and other crimes before.

“This is not a new incident.... Several such incidents have been reported earlier where students of NE are victimised and we have taken adequate steps to sensitize the people...Even after 48-hours of the incident the police failed to arrest the culprits involved in the crime, which exposed the discriminatory attitude of the people from mainland India towards the people of North East."

It is sad that one part of the country is referred to as "mainland" that has to be "sensitized".

Madhu Kishwar has the gall to equate this with Brahmin, Sikh, bania jokes. Murder is not a joke. Would she say the same were somebody assaulted for his choti, or tilak, or turban? Indeed, there is an escape route in those cases to make them about religion, caste, communalism, and therefore more worthy of our empathy. The NE does not have that leeway. I do understand that we are overly sensitive to slurs, even when said in humour. But let us not reduce a brutal attack to this.

If Nido did indeed react aggressively, why did the police insist on a compromise? Why did those who suffered damages because of him not file a case? This is as usual becoming about the victim made answerable.

It is also taking a political turn. His father is a Congress politician. Arvind Kejriwal of Aam Aadmi Party got an opportunity to hit back at the Delhi cops, against whom he had started the dharna. Now, even Mr. Sanjoy says:

"If the government, police and administration thinks that the Indian Constitution is for a section of India, we will have to go out like Arvind Kejriwal to the streets for our rights."

People from the North East have taken out protest rallies often enough, so I wish he had desisted from mentioning the CM who has only recently been anointed.

The Congress will do its own "we are looking into it", and the BJP supporters are playing with semantics. 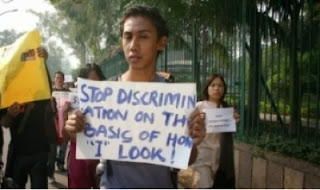 It would be better if we just accept that Indians are racist. We do discriminate based on how others look, what they eat and wear, how they speak. The problem for those from the North East is exacerbated because although they speak quite fluently in English and Hindi, they have Mongoloid features. So while we may treat the Chinese and Japanese with deference reserved for foreigners, those from the hills in our own country are given the "stray" treatment.

Partly, it is ignorance. Partly, it is isolation of the people from those areas, some of it self-chosen. The 'seven sisters' of the region do not make for the most amicable siblings, and have their own differences and cultural uniqueness. The same can be said about South India, but then the "mainland" has a blanket term "Madrasi" for all those from Tamil Nadu to Karnataka.

The point is how much can people be sensitised, and why is it even necessary? This sort of racist attitude is dumber than mere prejudice, for it lives in a dark hole from where nothing is visible except a fraction of light. There is no possibility of peripheral vision.

I do not like to talk about acceptance, as it is patronising, but should we not understand other looks, languages, cultures? Will these not enhance us?