How He Turned The Tables: The Rahul Gandhi Interview 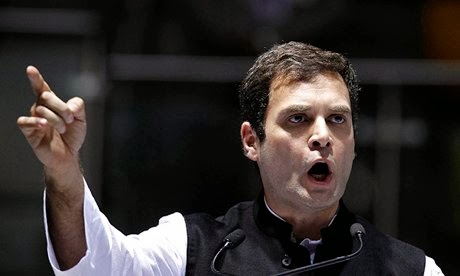 If you are looking for a parody or, more appropriately, a lame attempt at humour, then please skip this.

Rahul Gandhi may not be a great subject for a television interview, he may not even turn out to be a good political leader, but on the much-touted first-ever interview in 10 years (he clarified on camera that this was not the first, but the first formal one!) he did exactly what he set out to do. Say his piece. What seemed like repetition, if not ducking, was a strategy he adopted to bludgeon the inquisitor softly, if not tire him out.

Some in the media have dubbed this a Rahul vs. Arnab fight. I am amazed at the ignorance. No one, I repeat no one, in the higher echelons of power will give such a big interview without vetting the queries. Therefore, Rahul Gandhi must certainly have been aware of what Arnab Goswami (AG) would ask. If AG added specific queries later, then isn’t it funny that at the beginning of the interview he makes it clear and RG says “You can draw me back as much as you want” but would he be okay if he took a broader look? Think about it. Besides, it does not take rocket science (ahem, those Bharat Nirman ads) to figure out what the nation as filtered by the media would want to know. As he said:

"I have done a little media interaction, prior to this. I have done press conferences & spoken to the media. But mainly bulk of my focus has been on internal party work and that's where I have been concentrating, that is where most of my energy was going."


In the latter half I will reproduce some salient points, with quick notes.

First, the minutiae: This was not a live interview; it was conducted at Jawahar Bhavan; it lasted for a little under 90 minutes. According to The Telegraph:

But sources said the Congress leadership wanted to ensure that Rahul’s “outing” should be with a journalist who has a reputation for being unsparing. An off-the-record session between Priyanka Gandhi Vadra and Goswami, over pakoras and tea, also helped pave the ground for the interview, the sources said.


It just so happens that those who are building up this “unsparing” interviewer have rather short or selective memories. Some of us do recall his almost obsequious questioning of Bal Thackeray; even Raj Thackeray has managed to stand firm. So, let us not create heroes only because we need to look down on certain people.

Let us talk about some problem areas.

Why was RG not being specific?

Why should he? He will do so in his speeches when he addresses the nation, not for revenue-run TRP-driven media. Has Times Now donated to the Congress Party’s election campaign? Is there a quid pro quo? No.

Arnab did his business of mentioning names – as the tagline of his show states – and Rahul spoke about the issue. Yes, the issues are more important. It is the system that deals with individual offenders. If he took the names, or repeated them after AG, he would be a bloody stupid politician and VP of his party.

Why did he not take the Modi bait?

This was by far the best thing Rahul could have done. He treated Narendra Modi as just another guy. The persistent questioning about whether he would agree to a debate with the Gujarat CM elicited what I thought was a perfect clincher: “The debate is already going on.” This effectively took the battle to where it belongs – outside the TV studios.

Why did he not apologise for the anti-Sikh riots of 1984?

What would he achieve by doing so? Get brownie points from the viewers and a pat on the back from the media, with Times going berserk by claiming that it was their channel that brought about this major penance? The PM and Sonia Gandhi have both apologised, and if RG has to do so it needs to be done to the people who are waiting for justice.

Why did he not come clean about his degrees?

Here you have an anchor who has netted a huge catch, and he is quoting a shark lapping in the shallows. Arnab brought in Subramanian Swamy to put RG on the mat regarding his educational qualifications. With all his Ivy League credentials, Swamy comes across as an uncouth man. Besides, how is it important? This Oxford-Cambridge showing off might appeal to the urban upper middle class, not the majority of the population.

Has anybody bothered to check for how long exactly Modi ran a tea stall that he is using as his new USP? Is there any evidence of it?

Why did he not commit on the Aam Aadmi Party?

Simple. The AAP is not one that sticks to its own word, so how can anybody else? Here is one bit from the interview

Arnab: Are you using the AAP to split the Anti Congress vote bank, to keep Mr. Modi out of power
Rahul: You are implying that we have brought the AAP...


This was really giving it to those ones in the politest of tones.

Why did he keep repeating about RTI, empowerment of women, the system?

Because these are crucial subjects, though they don’t sound terribly sexy. Indeed, he used these terms to also answer unrelated queries, but as I said at the beginning, he was here to say his piece.

We have got so accustomed in the past few months to war cry rallies and dharnas that someone who comes across as vulnerable, yet refusing to fall prey, is not easy to accept. Calling Rahul Gandhi a fool might prove to be our biggest fallacy. 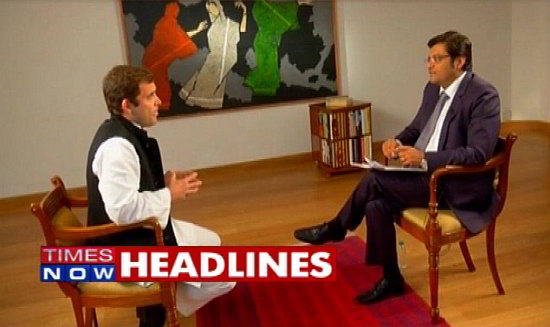 Here is how he answered some of the questions, from Modi to being attacked, and why moving off-track sometimes seemed to be just the right move:

“In my life I have seen my grandmother die, I have seen my father die, I have seen my grandmother go to jail and I have actually been through a tremendous amount of pain as a child when these things happen to you, what I had to scared of I lost, there is absolutely nothing I am scared of. I have an aim, I have a clear aim in my mind and the aim is that I do not like what I see in Indian politics, it is something that is inside my heart. It is like in our mythology when they talk about Arjun, he only sees one thing, he does not see anything else, you asked me about Mr. Modi you ask me about anything and the thing that I see is that the system in this country needs to change, I don't see anything else and I am blind to everything else. I am blind because I saw people I love destroyed by the system.”


Ergo: He does not care about Modi.

On right to information

“I am the first person who has been saying over the last five years, talking about transparency in the party. I have made the Youth Congress and the NSUI fully elected bodies. I have spoken about the six bills in parliament. I have spoken about the Lokpal Bill and I have pushed the Lokpal Bill. I was involved in the RTI. We worked together to bring the RTI. So as far as transparency in the political party is concerned I am absolutely for transparency. There are questions about the RTI that need to be discussed and thought through. The real question is that our system is based on different pillars. And the question is which ones of these pillars should have RTI…Am I for opening up? Am I for bringing RTI into as many places possible? Absolutely. Am I for creating an imbalance and weakening the legislative structures of this country. No I am not.”


RTI enthusiasts should note that it could be misused. (This is what I had written in an earlier piece.)

On his silence regarding the scams

“My position was that I report to the Prime Minister. Whatever I felt I had conversations with the Prime Minister. Whatever I felt about the issues I made it abundantly clear to the Prime Minister. I was involved in the legislation, RTI legislation. And now I have helped pass the Lokpal Bill. I bring you back. The real issue here is participation of people in politics. It is bringing youngsters into the political system, it's opening out the political system. That's where nobody wants to talk. Everybody is perfectly happy with 500 people running the entire system in India. Nobody, none of you want to raise that issue. The fundamental issue. How do we chose candidates?”


By reporting to the PM he obviously meant he discussed it with the PM, instead of with Arnab Goswami.


What is wrong about this? When was the last time we heard a politician talk about ideas? We have to lump coalition politics; he is telling us beforehand what will swing it.

On possible defeat of the Congress

“If we don't win, I am the VP of the party of course I will take responsibility for it.”

“I don't actually keep invoking my family name, I have mentioned my family name once or twice and then people report that. The real issue is that I didn't choose to be born in this family, I didn't sign up and say that I like to be born in this family it happened, so the choice in front of me is pretty simple I can either turn around and say okay I will just walk away from this thing and leave it alone or I can say I can try and improve something. Pretty much every single thing I have done in my political career has been to bring in youngsters , has been to open up, has been to democratise. I am absolutely against the concept of Dynasty, anybody who knows me knows that and understands that. But you are not going to wish away Dynasty in a closed system, you have to open the system. Dynasty or children of politicians becoming powerful happens in the BJP, it happens in the DMK, it happens in the SP, it happens in the Congress party, it happens everywhere.”


This is exactly what he did. For, how many people are going to vote or not vote based on 2G, Adarsh, Coalgate? Is not Modi ruling despite the riots of 2002? Did not the Congress return to power after the Emergency and 1984, and the BJP after Babri? Having said this, RG will have to push the system to expedite the judicial process and respect it.

On being a ‘reluctant prince’


Rahul Gandhi may not win the elections for the Congress Party; he may not become prime minister now or ever. But, if he continues to fight unfairness, then that should goad many to do so.

The fact that many in the opposition, and even those who have suddenly discovered “balance”, are behaving like a cat on a hot tin roof, even though they call it rolling on the floor laughing, is proof that he has touched a nerve.

PS: I won’t even bother with a disclaimer. If you want to understand what a critique is, click on the label. Or keep your peace.