"Out with stereotypes, feminism proclaims. But stereotypes are the west's stunning sexual personae, the vehicles of art's assault against nature. The moment there is imagination, there is myth." 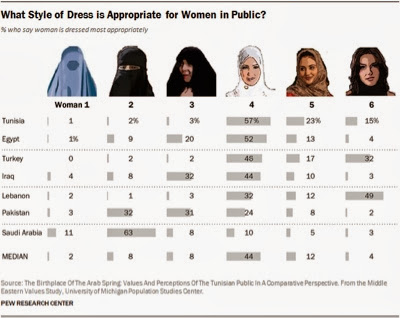 "Do not put garbage in our mind." This graffiti on the wall outside Tunis City Hall has been quoted to explain the attitude towards women's dress following the Arab Spring.

As happens with all such studies in a cocoon, it uses a small sample and reaches broad conclusions, that too about what the respondents thought 'might' be appropriate but is not necessarily practised. Worse, it is actually based on the false premise of what constitutes "MidEast countries". Tunisia, Egypt and Pakistan are not in the Middle East.

While the research, and mainstream commentators, assume a superior attitude towards "secularism", they forget that their obsession with what is termed "Muslim dress" is anything but. They are working their way backwards, and become as veiled as the veils they find constricting when their idea of "women's choice" becomes selective.

This is not even the imagination or myth that Paglia speaks about. It is merely a lame excuse to falsely manufacture how free they themselves are. 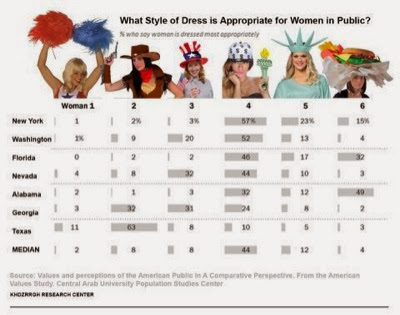 The above tongue-in-cheek response in the web world to the research chart shows us just how hollow such statistics and stereotypes can be, using mere mode of dress to formulate a point of view. Are you what others wear?

To paraphrase the graffiti, the garbage is in their minds.