Is this 'honour rape'? 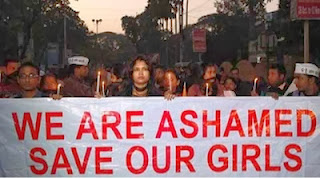 This should be treated on par with 'honour killing', that execrable term that props up the worst form of patriarchy.

A 20-year old tribal woman from West Bengal was in love with a man from another community. The panchayat, "salishi sabha", decided to punish her for it by asking the villagers to rape her.

Under a thatched roof — and according to later reports this was on a platform so that people could watch — she was brutalised by a gang of teenagers and men old enough to be her father.

This is not about one incident at Labhpur in Birbhum district. It is not even about the male mindset alone. These men volunteered to be part of a quasi legal verdict. It is easy to dismiss it as khap panchayat backwardness. But who gives them such power that they can empower the locals to assault one of their own?

Conquering armies have abused women to score points against an enemy. Who is the enemy here? A woman from their tribe. Besides the obvious heinousness of the crime, her family being ostracised for speaking to the police is extremely disturbing. People who watched the crime have come to believe in their stand. They think it was right, and the real crime is of moving out of the community-laid rules.

The cops arrested 13 of the rapists. They ought to arrest the members of the panchayat as well as the onlookers. There would probably be no evidence of the latter, but given that the village is against the family each one of them is a suspect as witness to a crime committed.

There has to be en masse justice in such cases, for the ones who raped followed orders. In this disgusting display, the villagers might end up considering them heroes who saved their honour.

What worries me is we will have one more reason to call out such panchayats and yet continue to watch the televised shows where each detail is painfully read out to the public, as happened recently in a sexual molestation case. The anchor khaps are a mimicked version. This really is not too different to what happens in areas not removed from the social mainstream.

What we should be ashamed of is that we will forget about it until the next case.