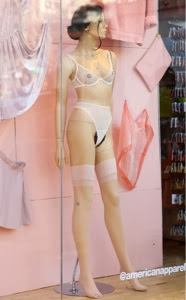 Why can't they just leave women's body hair alone? From Cameron Diaz to American Apparel, they are being intrusive.

To think that the Hollywood star has discovered feminism via down under is a bit much. She is selling her book, and just like propping up the smooth skin is a big ticket there is a market for fuzz when these views come pregnant with adjectives. It is almost always "shocking images", and about being raw.

If Lower East Side Manhattan is going to curl up with embarrassment over a clothing store that shows mannequins in transparent lingerie showing off pubic hair, then it has little to do with reluctance to accept the natural.

If natural is what we want, then why restrict it to hair on the privates? Where is the fuzz on legs, arms, face? Where is the pigmentation, the natural contours of the belly, the hip? You can't create a woman, or a mannequin, to look like a stereotype and then talk about how liberating it is not to depilitate.

"We are a company that celebrates natural beauty...We created it to invite passerbys to explore the idea of what is 'sexy' and consider their comfort with the natural female form."

For all the liberating talk, they are telling women that it is okay, that this is sexy, and they ought to just lie down and be comfy. It is such a magnanimous gesture that girl power will rush to buy the stuff. It happens to be the Valentine's Day window display, much in advance. Those women who have made the horrible decision to get themselves into a pre-pubescent stage have enough time to redeem themselves and grow it all back, so that when their boyfriends or spouses get these itsy-bitsies gift-wrapped for them, they can 'fit into' the role that the show window wants them to. All this, including celebrity endorsement, amounts to talking down to women.

The New Age man is always ready to experiment, therefore he would probably walk into American Apparels and imagine a fresh from mother earth sensation.

Also, do notice that the hair is dark, very dark. Why are there no red heads, blondes? Does 'nature' and its connotations imply only a shade that is perceived as belonging to the untamed? Is this not racism?

Somebody has called the display retro. We might have a pop version, a blues version, a nirvana version.

Cameron Diaz has a chapter in her book titled 'In Praise of Pubes' where she asks, "Do you really want a hairless vagina for the rest of your life?" Had this been a serious question, one might have attempted an answer. There is some merit in bringing it out in the open, but she refers to pubic hair as "pretty draping" and "mysterious". She obviously knows what evolutionists or creationists, depending on how she swings, intended it to be, if not god her/himself. What if some do not find it pretty?

She says such hair is like having a nose. The comparison ought to have been with nose hair. Will the big studios like to see poky little hairs sticking out from every part of the body? More importantly, where does one stop at grooming or start?

The idea behind grooming anyway amounts to interfering with what is available material. From head to toe, we meddle in the affairs of the body. It could be to please others, but to a large extent it is also what we are comfortable with. One is not contesting how social brainwashing might affect us, but will those using such images to get us back to basics show us a complete picture where nothing at all is groomed, and not just the sexual organs?

Whichever way you look at it, the obsession is with the female form. Clean-shaven men are seen as metrosexual. Clean-shaven women are now deemed unnatural. From grooming too much to now not grooming, we are sought to be objectified.

This is a private matter between us and our bodies. Do not tell us what to do behind the fig leaf.